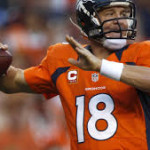 It’s that time of year again and I am ready to get you ready for 2014. Quarterbacks are not necessarily that dime-a-dozen position some lead you to believe. Heck, ask Eli Manning owners from last year. But there is not a ton of disparity after the top 3 or 4. However, fantasy sports are a fickle thing and getting the best QB at the right pick could mean a championship.

1. Peyton Manning – We may not get 55 TDs out of him, but Denver is still going to be a high octane offense because of Manning. There’s no way I can have him any lower.

2. Aaron Rodgers – I love this Green Bay offense and Rodgers is an elite talent. Not only do they have weapons on the outside, they have a legitimate run game now. Rodgers can run too, which makes him a premier Quarterback.

3. Drew Brees – Another given in the fantasy world. Brees is so solid and has so many weapons, that he rounds out the “Three Kings of Quarterbacks”.  Expect more big numbers from this offense.

4. Matt Stafford – The Detroit offense is in the running in the NFC North arms race. Stafford has the potential to throw for 5,000 yards. Not only does he have Megatron, they’ve added Golden Tate and the running backs are great pass catchers. Detroit is poised to strike often in 2014.

5. Phillip Rivers – I am taking heat for this high ranking right now, but Rivers is back to his old form. San Diego’s running back stable is deep and Rivers has a ton of good talent at WR to spread the ball to.  This guy is solid all the way around, and now in the second year of the new McCarthy system is great fantasy news.

6. Cam Newton – I love Cam’s ability to run and score TDs. I am not thrilled with a new receiving core and an aging run game. However, he does have Greg Olsen  to lean on and Kelvin Benjamin should make an immediate impact. Cam will get his rushing yards too.

7. Andrew Luck – With Reggie Wayne back, Hakeem Nicks in camp and TY Hilton to boot, Luck is looking to have a big year. He may be cut loose offensively this year. He has taken over the team and is a born leader. Great arm, can run and is tough: that’s fantasy gold.

8. Matt Ryan – I look for a real bounce back year for the Falcons. Let’s not forget Ryan threw for 4,500 yards and 26 TDs without Julio Jones, and suffered without Roddy White for most of the season too. With Harry Douglas emerging along with the other two, all Atlanta has to do is get a resemblance of a run game going to be really good again.

9. Tony Romo – I’ve said it before, I might not want Romo for my NFL playoff team, but I will take him all day as my fantasy QB. This guy does nothing but put up good numbers. You do have to watch his INTs, but 31 TDs vs 10 picks is pretty darn good. He is creeping up in age, and his back injury bears watching.

10. Nick Foles – What he did last year was phenomenal, but I have a feeling that the NFL will catch up a bit with Chip Kelly’s offense. He has lost Jackson, but brings in Maclin, so that is a wash in my mind. Avant is gone too. Sproles is in town and that could mean some two back sets with McCoy. Philly will still cause problems and Foles is a QB1.

11. Tom Brady – Brady is good enough to just turn things around and have another blockbuster year. Will he? I’m not so sure, but I think he deserves a ranking in the top 12. The system works and the Pats always put pieces together to score a bunch of points. Time is running out for Brady which is another reason to watch out.

12. Robert Griffin III – I’m just cautious enough to know what he can do if healthy. I think you must consider him a QB1. He has DeSean Jackson to compliment Pierre Garcon, and Washington has a good run game. Watch for RGIII to be much less timid in his running this year too.

Those are your QB1 rankings. Here is the best of the rest:

Keep watching as the season nears, because things change and so do rankings!