Don't Miss
Home / Article / The Disgusting Behavior of Some Fans

The Disgusting Behavior of Some Fans 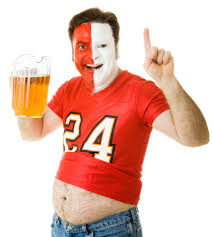 We had the pleasure of covering the Hall of Fame weekend in Canton, Ohio. We met and interviewed the class going into the hall and many other members who were there for the festivities. During our down time, we shot some shorts and put together material and things of that nature.

When the ceremony was over with, the last thing on the agenda was covering the first pre-season game of the year. Of course we know this is pretty much a meaningless game, but it was the ONLY NFL game being played and the chance to get the season under way and capture some post-game interviews was appealing.

We were happy to have front row seats on the 30 yard line on the Buffalo side when the game started. When it was winding down, I could not wait to head down to the field to get some interviews. Truly, I wanted to get a little player insight, but mostly to get away from the obnoxious fans next to us. I have seen drunken fans, extremely loud fans, angry fans, even the degrading screamer. But there seems to be a new breed of fan that is growing in numbers and it hit me at this Hall of Fame Game. It’s the Gimme Fan. It is not the fan who is seeking an autograph with a sports star. It is not the fan seeking a photo of or with their favorite player. It is not the fan throwing out some verbal support in hopes their star will return a comment, a nod or a high five.

I’m talking about the fans, who by the mere fact of buying a ticket; feel entitled to whatever the players have.  It was prevalent during the game when fans with goofy hats, stupid costumes and odious personalities screamed at the top of their lungs right by the sidelines for players to drop what they are doing and come over for a picture or autograph. They are on the job and working people. It really doesn’t matter what job you have, be it a plumber, a doctor or a busy burger cook at a fast food restaurant; that is your task at hand. You don’t just leave when you feel like it. Additionally, who would feel like walking over to someone who is having a hard time standing acting like a photo op with him is as appealing as having one with the player.

So I’m a little surly. I’ll grant you, fans can scream all they want, so I’ll let it go. But what fueled my fire was after the game. As we gathered waiting for players to head to the locker room, shower and come back out for some interview time, I was appalled at the spectacle made by the remaining fans. Now, I’m not judging all fans by a few bad apples: Hell, I’m a fan! At this point most all of the fans had left. But not the Gimme Fans. As players headed down to the locker room the calls from fans were not asking for a photo. They were not asking for an autograph. They were not shouting words of encouragement or even fan wisdom for the player to react to. It was a DEMAND for something. “Gimme that Gatorade towel!”,  “Gimme those gloves! You don’t need ‘em anymore!” (An actual quote).  I actually heard a demand of “Gimme your shoes man!”

In an age where the players are crucified for being too aloof, because they make so much money and have no connection with the real world or the little people, these fans are as demanding and angry as a hungry infant. It is a breed of fan that is angry and feels they deserve a piece of whatever the athlete has. This is a disgusting display of envy and jealousy that makes me sick. If I buy a ticket to Mumford and Sons, do I deserve that one of them gives me a guitar? It’s ridiculous and they should be ashamed of themselves. Wake up fans! It’s miserable to be around miserable people at a game that should be so fun.