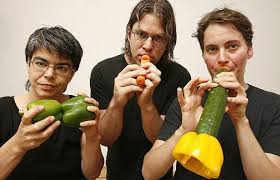 The Asylum is back live on The Tuesday Blitz and the Armed Forces Radio Network. Join Fleeger and Briggs as we break down all of the week’s sports headlines including the Michael Sam announcement, the disastrous Cleveland Browns situation, and Richard Petty’s affront to Princess Danica. We also update the first mock draft of 2014, give our Olympic update, and have a borderline inappropriate conversation about a Vegetable Chorus. You’ve got to hear it to believe it.